Castlelyons put its best foot forward in last nights National Night of Culture when a full crowd turned out to see an array of local talent showcasing all that is good in drama ,comedy, recitation, singing, dancing and a good yarn thrown in for good measure. The night was set in the pub of Billa and Nonie (none other than James Ronayne and Anne Hegarty-who else?) and at times it did seem like part of a pub session in one of the local hosteleries. The night opened, like many other occassions,with our very own Castlelyons Pipe Band who gave a few rousing tunes on the pipes. Next up was Jimmy Morrison and family on accordion who played some lovely tunes followed by the O’Donovan family and Fermoy Comhaltas including step dancers and musicians with some foot tapping and clap-along jigs and reels very much appreciated by the lively audience. Liam Crowley, our adopted son, had the crowd in hysterics with his own take on some well known songs and not to be outdone Eamon “the Transit Van” Fitzgerald had the crowd roaring for more with his “Why I won’t be at work today”. The first half was completed with songs and recitations from our local national schools and 2 beautiful songs performed by Sarah Barry. Our Gospel Choir opened the second half with outstanding solo performances from Holly McGrath, Pauline Kiely, Shane Murphy and Ciara O Connor.

More comedy followed with the young and very talented Ellen Quirke giving a rendition of Snow White and the Seven Dwarfs like you’ve never heard it before!! Certainly a budding actress/comedienne in the making-watch this space. Liam Crowley and Julie Nolan then gave a hilarious performance of “Goodness Gracious Me” complete with stetoscope and patient couch (you’d need to see it!) before it was the turn of Aine Maye with “Always a bridesmaid”. John Joyce and Sheila Casolini, who had just arrived from Knock, did a duet with “There’s a hole in the bucket”, done in the way only these two could do it. Then it was the turn of Maurice Carroll with his effortless voice singing “Dublin Town” and “What colour is the wind”. Last of the musicians on the night were Brigid and Fiona O Flynn on flute and melodeon with Una O Brien accompanying on violin.

The night was interwoven with yarns and jokes from Billa and Nonie, who kept the crowd entertained all through, but the best wine was kept til last with little Lauren – a Shirley Temple in the making- singing a Donegal song “Gleanntáin Ghlas’ Ghaoth Dobhair” (where did she hear that from?) and the closing number- “Irelands Call” sung by Little and Large Shane Murphy and Liam Crowley -the “Castlelyons Tenors”, who had the crowd foot stomping and mexican waving and looking for more – maybe it was the full monty they were looking for??

All in all a great nights entertainment locally grown and produced . Well done to all performers, to Martha O Riordan as MC, the usual suspects Paul & James Murphy on Light and Sound and not forgetting the Barrymore players group for organising the event. Teas and cakes were served at half time courtesy of the local camoige club and the night was rounded off in style with what else on a night of culture only a genuine Irish session. 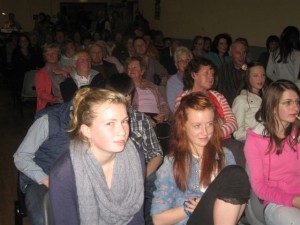 Some of the crowd who attended Castlelyons "Night of Culture"