Last Sunday night saw Drama at its very best in Castlelyons when six one-act plays took to the stage and everyone was treated to a most enjoyable night. The Festival was co-ordinated this year by Festival Director Martha Riordan with all the Barrymore members giving assistance when needed.

Adjudicator for the evening was Shevaun Hogan and the results were as follows.

Well done to everyone and especially to the Barrymore Players for their great success and who got a brilliant critique from the Adjudicator.

Well done to Martha and her team for an excellent night of Drama . Guest of honour on the night was Cllr. Tim Lombard, Mayor of the County of Cork. The group would like to wish Noelle Clarke & Paul Finn the very best of luck with their production of “Faded Footsteps” in the Circuit. 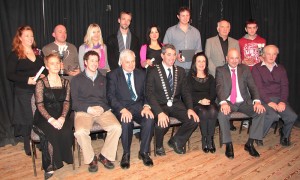