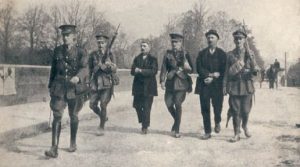 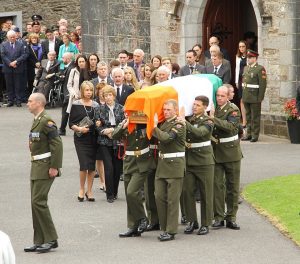 On September 18th 2015, Thomas Kent was laid to rest in Castlelyons, 99 years after his death

2016 is a hugely significant year for Ireland as a country and Castlelyons as a community. This year marks the 100th anniversary of the 1916 Easter rising. On the 2nd of May 1916,  Thomas Kent, his brothers William, David and Richard had returned home to Bawnard, having following the orders issued by Eoin Mac Neill to stand down. Little did Thomas know that it would be the last time he would set foot in his family home.

In the early hours of the morning of May 2nd 1916, the Royal Irish Constabulary led by Head Constable William Rowe arrived at Bawnard house, with orders to arrest the whole family. They surrounded the house and called for the Kent brothers to come outside. Thomas replied that they were soldiers of the Irish Republic and there would be no surrender. For the next few hours a battle ensued but the Kent’s, with only three shotguns and one rifle to their name, eventually ran out of ammunition. Mrs. Kent was in the house throughout the battle and helped the brothers to clean and cool their weapons.

The outcome of the gun fight was that David Kent was severely wounded and Richard Kent was shot and later died from wounds received. Head Constable William Rowe was also shot and died. After their arrest, Thomas and William were marched from Castlelyons to the Fermoy Military Barracks with Thomas bare foot as he was not given time to get his boots.

On the 4th of May 1916, William and Thomas were court-martialed. William was acquitted but Thomas was convicted and sentenced to death for taking in an armed rebellion. Thomas Kent was executed on the 9th of May 1916 in Victoria Barracks (now the former Cork Prison) by a firing squad. One of his last requests was that no Irish man would be part of the firing squad.

Thomas Kent was buried in a shallow grave in the grounds of the prison where he laid for 99 years. He has finally returned home to Castlelyons and been laid to rest in the family plot in the grounds of St. Nicholas Church.

As part of his Leaving Certificate in 2007, local man Brendan Hoare studied History and as part of the subject he was required to compile a written project on a historical figure/figures. He chose The Kents of Bawnard, below is a link to his submission.

The Kents of Bawnard by Brendan Hoare

Below is the Eulogy delivered at the State Funeral of Thomas Kent on the 18th of September 2015 by CQMS Gerry White, Collins Barracks.

Just over ninety-nine years ago, on the morning of 9 May 1916, Commandant Thomas Kent of the Galtee Battalion of Óglaigh na hÉireann, was taken from his cell in the Military Detention Barracks in Cork and executed by a British Army firing squad. Today, as we gather to remember him and pray for the repose of his soul, it is appropriate that we remind ourselves of who he was.

Born at Coolagown, County Cork in 1865, Thomas Kent was a man of his times; religious, with a strong belief in social justice, he also believed that Ireland should be both Gaelic and free.  These beliefs led him to join the Land League, the Gaelic League, the Gaelic Athletic Association and the Pioneer Total Abstinence Association.

When the movement split in September of that year over John Redmond’s call to take part in the war that was then raging in Europe Thomas and his brothers were among those who refused to support Redmond and the majority in the movement who became the National Volunteers. Instead they chose to remain with the more separatist minded Irish Volunteers.  After the split the Irish Volunteers had to rebuild their entire organization.  In the summer of 1915 Thomas Kent joined Terence MacSwiney in reorganizing the Cork Brigade. So successful were their efforts that by April 1916 a total of forty-seven Volunteer companies had been established within the county.

Because of the series of conflicting orders that emanated from Volunteer Headquarters in the week before Easter, the first he and his brothers, David, Richard and William, heard about the 1916 Rising was when they read about it in the newspapers during the week. In the absence of any orders they armed themselves and decided not to stay in the family home at Bawnard at night until the military situation was clarified.

On 1 May the Kents learned that the Rising had failed and they decided it was safe to remain at home.  Fate, however, would dictate otherwise. Early the following morning their home was surrounded by members of the Royal Irish Constabulary who called upon the bothers to surrender.  They refused and a gun battle erupted which only ended after British Army reinforcements arrived and the Kents ran out of ammunition.

During the fight Head Constable William Rowe was shot dead and David Kent was wounded. After the brothers surrendered Richard attempted to escape but he was shot and seriously wounded.

Once order was restored David and Richard Kent were taken to Fermoy Military Hospital for treatment. Thomas and William were then marched to Fermoy Military Barracks and their mother followed in a horse and cart. Thomas made the journey in his stocking feet and, although the image he presented was anything but heroic, it had a profound impact on many of those who witnessed it.

Mary Kent was subsequently released after a couple of hours and the following day Thomas and William were put on a train under military escort and taken to the Military Detention Barracks in Cork.

Two days later Richard died of his wounds and Thomas and William were brought before a Field General Court Martial and charged with ‘Waging war against His Majesty the King’.

William was acquitted but Thomas was found guilty and sentenced to death.

In the early hours of 9 May Thomas Kent received his last meal and spent some time praying with Father Patrick Sexton, the chaplain of Cork Military Hospital.  Shortly before 6 a.m. he was offered some alcohol but he refused and, in what turned out to be his last act, he gave Father Sexton his Pioneer badge and asked him to return it ‘untarnished’ to Father Michael Aherne in Castlelyons. He was then taken from his prison cell and placed against the wall of the exercise yard and there, clasping rosary beads given to him by Fr. Sexton, he stood ready to meet his God.

Then, as the bell in the clock tower of Victoria Barracks began to strike six, a volley of shots rang out and Thomas Kent fell to the ground. The officer in charge of the firing squad then walked over and fired one last shot to ensure that he was dead and his remains were placed in a shallow grave in the exercise yard.

There is nothing in Thomas Kent’s history that indicates that he was a violent man. In fact, it was confirmed at his court-martial that he had never resisted arrest before that fateful day in May. We will never know what motivated him and his brothers to resist arrest on that occasion. However, it is possible that they were influenced by an order issued the Wednesday before the Rising by Eoin MacNeill, the Chief of Staff of the Irish Volunteers, stating that defensive measures should be taken if attempts were made to arrest members of the organization.

In the weeks and months ahead what happened in Ireland during Easter 1916 will be carefully examined and debated. In this regard, it will be important to remember that these events must be looked at in the context of their own time. It is also important to remember that the Ireland of today is not the Ireland of 1916. We live in a different country and in a rapidly changing world that presents its own challenges. As we face those challenges let us be inspired by the ideals of patriotism and self sacrifice that motivated Thomas Kent, his family and the men and women of 1916.

For ninety-nine years Thomas Kent’s remains lay in a lonely grave behind the walls of Cork Prison beneath a headstone that bore the title Óglaigh na hÉireann and the emblem of the Volunteer movement.  For many people he remained an obscure figure, the ‘Forgotten Volunteer’, someone they knew Kent Station in Cork was named after, but little else.

Today, however, all that is changed. Today, because of the recent discovery of his remains he has once again become someone who is very much in the present.  Today, members of Óglaigh na hÉireann, the Irish Defence Forces, will render the military honours that were denied him ninety-nine years ago. Today, Thomas Kent will no longer be the ‘Forgotten Volunteer’. Today, after ninety-nine years, Thomas Kent will finally be coming home.