Published February 5, 2012 | By Will Hourihan
In front of a very large crowd of local well wishers, the role Dave Hegarty (or Dave, as he is known far and wide) played in the promotion of Gaelic games in the parish was very much acknowledged at a special presentation at the local Community Centre last night (Fri 3rd Feb). Included in the crowd were several dignitaries from the GAA including none other than Christy Cooney, Uachtaran Cumann Luthchleas Gael and many officers from the Cork County Board. The presentation was organised by the local Juvenile GAA Club to coincide with Dave retiring as secretary and having devoted over 40 years of service to the club in Castlelyons.

The night began with Neil Spillane, chairman of the juvenile club and MC for the night, welcoming all present. He then introduced several speakers including Anthony O Regan (Castlelyons GAA,) Ger Lane, Gerry O Sullivan,mWillie Ring, all Cork Co. Board and of course the main speaker Christy Cooney. Christy spoke of the importance of recognising and appreciating the work done by the “Dave’s” of the world and remarked on the huge turnout of local people showing their appreciation for the time and effort put in by Dave over the years. Parents in their 30’s up to parents in their 80’s were present and this was testament to the trust they put in Dave and the juvenile club in looking after the youth of the parish over the years. Several presentations were then made from the school and camaoige club before Dave was presented with a beautifully commissioned painting of the pitch and castle in the background, painted by our own Catherine Gunther Quinn. Catherine was presented with a bouquet of flowers and Gerry Healy was also given a presentation for his time as juvenile chairman.

All the speakers spoke of Dave’s sense of fairness and treating all players equally and how despite several requests he never left the juvenile ranks of Castlelyons. Coaching juveniles is the coalface of the GAA and he stuck at his job diligently when it might have been more rewarding and higher profile to join the adult club. Dave stuck to his task down through the years and he was rewarded not only last night but also with the success the club has achieved over the last number of years and the position it holds today, some 40 years on from when Dave started.

The night finished with tea and sandwiches served by the hard-working organising committee who are to be credited for a great night. 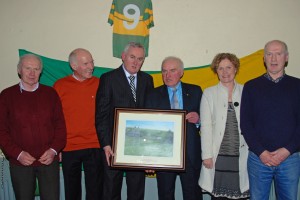